My second author interview is with the larger than life Authonomy Icon - Adam Sifre - known to many as Splinker. 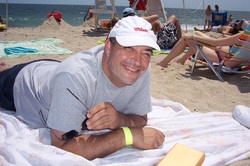 When attorney Adam Sifre is not practising law, he is perfecting his literary skills and prowling the internet in the guise of Authonomy institution, Splinker. He is a prolific writer of short stories, poetry and novels. I've known Adam online for a couple of years and recently have been privileged to get to know his writing better by "laundering his shorts" before he published them on Kindle and editing "I've Been Deader".
Sorry to disappoint all those who were expecting to see the cheeky blue sock puppet - but apparently that isn't what he really looks like. Who knew? Here's Adam's interview.

What made you start writing in the first place?

I don’t even know what made me start eating raisin bread for breakfast.   It’s just something I started doing.  People liked what they read, my ego grew and demanded that more people like me, so I kept on writing.   Then, just when I thought my ego could not possibly get any bigger, I wrote “I’ve Been Deader.”

Where and when do you usually write?

I usually write in the early morning and late evening.  Sometimes I’ll write in the afternoons or early evenings; sometimes a little after dusk or if it’s raining.  I write when I’m stressed and want to do something I’m good at.

Which writers have inspired you?

How do you handle Writer’s Block?

I find that bitching about it for several days often helps.   Then I sit down and write something that I think is terrible.  Then I wait another few weeks and try again.

Are any of your characters based on real people?

Fred is loosely based on me.  People think that zombies are fictional, but believe me, there are plenty of us shambling from place to place with vacant stares and not a functional thought in our heads.  You can find us at shopping malls, the motor vehicle department, office parties, blind dates – we are legion.

There are a few gloriously ‘yucky’ scenes in “I’ve Been Deader” – where do you get your ideas from? (The drag queens, "Dead Divas", spring to mind!)

Usually when I’m driving.  I’m always thinking about weird and funny situations.   I do very little outlining before I write.   I just wait for an interesting thought to make itself known, write it down, and start tweaking it.   The idea for the “Dead Divas” for example, occurred to me when I passed some prostitutes outside the Lincoln tunnel in New York City.   The thought of paying a stranger for sex terrified me.  I mean, who knows what someone will do to you if they get close enough?

What has been the most encouraging comment you have received in the process of bringing “I’ve Been Deader” to the attention of horror and comedy fans around the world?

I know that I have a tendency to come off as a bit egotistical, but in all honesty, I’ve received comments from hundreds of readers telling me how much they loved the book (and not just from writers looking for return compliments – the jackals).  My memory is worse than Charlie Sheen’s, and I’m sure I’ve forgotten many great ones.  So I’ll just post one comment that I picked at random, sent to me last year from a reader on Scribophile.com:     “I’m not a fan of the horror genre.  You can watch your undead movie while I watch Angeline Jolie.  But you’ve got something.  Perhaps it’s the perfect comedy timing.  Perhaps it’s because you somehow manage to make us identify with rotten old Fred.”

What finally prompted the decision to self-publish?

That’s a difficult question.  I’ve had a lot of interest from several reputable agents, but in the end, nothing has come of it.  Harper Collins asked for a full manuscript after reading 10,000 words or so.  As far as I know, they’re still interested but I can’t shake a final answer out of them.   (I still love you, HC!).  I’d love to go with a traditional publisher, not because I won’t make money self-publishing, but because selling books is hard work, and I’d rather be writing or playing Xbox (not necessarily in that order).

Self-publishing isn’t easy, but I enjoy the control I have over the product and it’s exciting to put your baby out there for the world to buy.  I mean my book, of course, not a real baby; won’t be making that mistake again.

Describe the real Adam Sifre in 10 words – no adverbs, please!

That’s an easy question:  Adam’s a charming, engaging writer with a flair for understatement.

Hey, Adam - you completely forgot to mention your modesty! Would you like to plug now?

“I’ve Been Deader” is available on Amazon.com and Smashwords.com for download only.   The paperback will be available when I finish the prequel, “Take A Breather,” sometime in late March/early April.

If you simply can’t get enough of Fred and the rest of the undead, drop by “I’ve Been Deader’s Facebook page ;).  Stick around.  We’ll have some fun.  https://www.facebook.com/pages/Ive-Been-Deader/111989752147332 .  Fans, stalkers and Nigerian lottery agents can always contact me at ibdeader@hotmail.com.