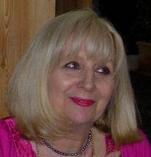 Tonia Marlowe is a multi-talented and versatile Australian writer.  In December 2011, her novel "Blue Diamonds" reached the dizzy heights of the Editor's Desk at Authonomy.com, and she is currently awaiting the coveted review from Harper Collins with bated breath. So are her many fans.

Here's what Tonia had to say about herself when I pestered her into answering some questions for me.
What first prompted you to start writing?
If I say "story telling", that started at a very early age before I write. My school essays were always highly imaginative and I was encouraged by some wonderful English teachers to write short stories. Many years later I started freelance and contract  non-fiction writing for trade magazines, journals and the like.  I started a lot of novels, at least five or six are languishing somewhere, but it wasn’t until five years ago I found the self-discipline to actually finish one. First was a science fiction novel, which is somewhere on my computer. Then another and another.

"Blue Diamonds" a romantic thriller, was one. "Strange Bodies" my current opus, is a very different murder mystery set in 2067.

Do you have a writing ‘routine’, or do you just fit it in around your daily life?
Writing is my daily life!  The rest takes second place and is fitted in when I'm inclined.  My family is grown and gone, my musician husband is always busy so I can do what I like, more or less.

Where do you usually write?
Always in my study at my PC.  I also have notebooks scattered around the house so I can jot down stray ideas.  I can rarely understand what I wrote if it's written at 2am in my bedside scribbler.

Do you plot your story before you start to write?
Hmmm, that's hard to say. I write in three different genres and my approach is different for each. I'm never sure where to start a book and often swap the first few chapters around, but I always know the ending and usually write a detailed outline of the final chapter. That gives my characters a goal to work towards.  For sci-fi, I do plot with a detailed outline.  Others - no, I give my characters their head and away they go, nattering endlessly in my head.

What is the most important step in the writing process for you?
Editing and re-writing.  I actually loathe the act of writing and love having written.  I am not a touch typist so I am a slow writer which is very frustrating sometimes as I can't get my thoughts down quickly enough. Every word and phrase is scrutinised to ensure it is the best I can achieve at that time. And I am quite ruthless when it comes to pruning the deadwood.

“Strange Bodies” features a lot of high technology – are you a ‘techy’ person?
I used to be but it has rather passed me by in the last few years, so at the time I first started thinking about SB I realised I need to do a lot of research. That took around four to five months, and many pages of notes, a lot hand written.  In the meantime the characters were clamouring to have their biographies written, so they became my constant companions, day and night. Getting the whole thing down on paper took another five months and eventually ran to 125,000 words, now heavily edited back to about 105,000.

Who are your favourite writers? Is there anyone who really inspires you as a writer?
How long do I have?  The writers whose books I will always keep and/or buy are:

I have learned a lot, and been inspired by all these authors and many more.

Do you feel networking with other writers is helpful?
Yes, but very time consuming. As a master procrastinator both Facebook and Authonomy probably play far too big a role in my daily life.  I have managed to escape from the other three writers' sites I was involved with so feel virtuous in now having only two to distract me!  But I love all the friends I have made from all over the world.

“Blue Diamonds” is currently up for review with Harper Collins following its successful climb to the Editor’s Desk. What are your feelings about the process you went through to achieve that accolade?
I joined Authonomy in July 2010, not having the faintest idea of what to expect.  I really did nothing for a couple of months, then ventured into the forums and started a "shameless" thread or two.  Just as it started to do well and attract readers and backers I was forced off the air for three months.  After that it was a slow but steady climb, taking good advice for improvement and editing BD, but still not expecting to reach the top of the greasy pole.  In fact it wasn’t until I hit around 40 that I realised I was probably going to make the top 5 eventually.

I will always be grateful to HC for creating Authonomy. I can honestly say it changed my life in ways that few other things have. I am a much better writer for having been a member.