Another interview with a fabulous author.

The delightful Jue is one of the stars in Authonomy's heaven. She's clever and funny and a thoroughly good sport. She's also a really good writer which is why she's featured here.

Her current WIP, Canterbury Warriors is a tough, gritty tale of life on the Canterbury estate.A strong and moving story - It is not for the faint-hearted. I am dying for her to finish it so I can read the rest.

Jue is one of my favourite people, despite the fact that she recently thrashed me soundly in a head-to-head Flash Fiction battle.
I look forward to a rematch at some point! Here's what she has to say about herself:

1.       How long have you been writing?
(I’ve been writing as long as I can remember. I wrote my first full length story when I was nine and I gave it to my teacher (Mr McKay) He very kindly – and I don’t know how he did it – got it leather bound and printed. He had my name embossed in gold on the cover and then read it out in an assembly. My first taste of fame!

2.       Do you have a writing ‘routine’, or do you just fit it in around your daily life?
My life is quite hectic, I have five grandchildren and four foster children (one of whom is pregnant) so I usually write from about midnight until about 3.00am.

3.       Where do you usually write?
I have a little office that overlooks my garden but because of when I write, I usually end up at the kitchen table with the radio playing quietly.

4.       Do you plot your story before you start to write, or do you start and see where it takes you?
I do envy people who can simply start to write and see where it takes them. Me, I’m an obsessive planner. I have to do a ‘cast’ list, followed by 25 ‘big ideas’ (I know, but it’s a ritual) Then, under each ‘big idea’ I try to come up with four or five possible scenes. This gives me 25 chapter summaries, a solid skeleton from which I work.

5.      Which writers do you enjoy reading?
This is like asking me which food I like eating. The answer would be all of it! I really don’t know, but I love autobiographies, I love Martina Cole, Dan Brown, Bret Easton Ellis, so so many others too. In fact, if I have nothing else to read, I will read a text book or try to learn something.

6.      Do you ever base your characters on people you know?
Almost always. I tend to think that characters are more believable if they have some traits based on real people that you knew or know.

7.       Can you tell the readers something about your current WIP “Canterbury Warriors”?
I spent about six years of my early life on this estate and I think readers will immediately recognise the realism. The story isn’t something that everyone will enjoy, it’s about the seedier side of life, the side which some people refuse to believe actually does exist, even today. It is set in the 1970’s and follows the life of Vinnie and his family and friends. It details the ‘make do’ attitude that was typical of estate life, the poverty, the unemployment and the criminal activity. Vinnie spends more years in prison than he does ‘outside’ and as the book progresses I go into his life on the ‘inside’, the grim reality of prison routine and what Vinnie has to do to survive. To keep with the theme of reality, I talk about some real life (true) situations, such as the hunger strikers, the political prisoners from the 70’s, ‘dumped’ into British jails as there was nowhere else to put them. The riots and Thatcher’s so called ‘reform’ system. I have fictionalised a major story line that runs throughout. That of a paedophile from the estate and his subsequent murder. As this story is based on some truth, I have had to ensure that certain characters remain anonymous. Although most of the ‘big players’ are now dead, they have remaining family members who I have had to disguise simply because there are still some police files that remain open, and I can’t let these people be recognised. It has been difficult, and I have had to let some of these people read my draft before I place it on the internet. As you can imagine, if this ever were to be published, there would be quite a lot of controversy surrounding it.

8.        Did you have to do a lot of research or did it all come from your imagination or experience?
I only had to research the penal system in the 70’s and also the facts surrounding the prison riots and the hunger strikers. The rest, I either witnessed, heard about, or it continues to be passed through the generations.

9.       What has been the most helpful piece of advice you’ve received as a writer?
Two pieces really, each as important IMO; read anything and everything, and write from the heart.

10.   Is there anyone who really inspires you as a writer?
Actually Martina Cole inspires me. She is a gritty, truthful writer who isn’t afraid to shove reality in your face. She tells it like it is, despite exposing herself and her own past. The very first writer to inspire me though was Shakespeare, by the age of ten I was totally absorbed in his writing. I would spend hours highlighting bits that I didn’t understand and then take it apart until I realised what it meant. I once spent weeks rewriting Macbeth in modern day speak and got my friends to act it out with me.

11.   Can you tell us a bit more about yourself?
At the weekends I transform myself into a 60’s cabaret singer, complete with beehive hair-do, flower power mini dress and heels. I’m also a Brenda Lee impersonator. These days, because of my hectic lifestyle I only perform once a week, but it’s my release and also gives me the opportunity to let my hair down and have a few vodkas. Once a month or thereabouts, I visit kids in prison whom I have befriended and I write and speak to them on the phone weekly. I try to arrange jobs or college for them when they get released and encourage them to keep in touch. This is a voluntary thing that my hubby  and I like to do.
Thanks, Julie! It was a pleasure talking to you. 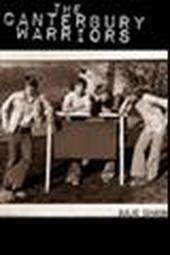 The opening chapters of  "TheCanterbury Warriors" can be previewed here:
http://authonomy.com/books/31148/canterbury-warriors/