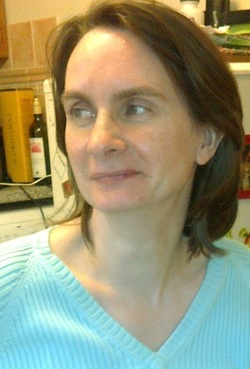 Today, I got to interview the lovely Lily Byrne, author of the Ragnar series. The latest book Ragnar and the Slave Girls has just been released.

I can’t remember, I’ve been writing since I was a little girl. My first book was about a family of four children who had a menagerie of animals, when I was about 12. I suppose it was prompted by my own pets and friends.

I just fit it in, as firstly I have a little daughter, a husband and an elderly mother so it's hard to get into a routine. And also I don’t get inspired to write all the time, I have unimaginative times then sudden bursts of inspiration.

At the kitchen table, or on my bed, or in the sitting room. Anywhere really! I’d love a study on the top floor overlooking the sea… maybe one day…!

4.       Do you plot your story before you start to write, or do you start and see where it takes you?

I plot it before I start, but only in a skeleton form. I don’t say: chapter 1 will be this, chapter 2 will be that. I don’t even write in chapters, I write the story, then put it into chapters at the end. But I probably won’t even do that in future as I only write novellas up to about 40K and chapters might be a bit pointless.

I usually use a plot structure called a Beat Sheet by the late, great Blake Snyder. See his website: http://www.blakesnyder.com/ And here’s a concise explanation of it: http://timstout.wordpress.com/story-structure/blake-snyders-beat-sheet/

It's really a plot structure for a screenplay but as I like movies and scripts that suits me! I write down the story I want to write, then decide at which point an event or crisis should happen. This can involve shuffling things around, for example, should a character death happen before or after the wedding of two other characters?

Not specifically but people I know inspire me to use their traits in fictional characters. I like observing what people do and how they interact, then use some of what I see to work out what my characters are like and what they do.

I read a book called Making A Scene by Jordan Rosenfeld, where I learned that all characters should have their own motivation in a scene. They shouldn’t just do things for the sake of the plot, they should have a ‘what do I want out of this?’ attitude. I suppose I sort of knew that but it was nice to get specific advice about it.

I can’t decide. Probably the Ragnar books cos I enjoyed the research so much! And the characters are the most interesting. Ragnar and the Slave Girls is my latest in the series, its free at the moment:

7.       Do you have to do a lot of research or does it all come from your imagination?

I had to do a lot of research for my Ragnar the Dane series- how did they do simple things we take for granted, like make clothes? Even eat dinner? The research was fascinating, I got completely caught up in it.

For the contemporary books I’ve written, a lot of the environments the characters live and work in are the same as mine, such as colleges or libraries. So I just needed to remember what the atmospheres were like.

8.       What has been the most helpful piece of advice you’ve received as a writer?

Don’t follow too much advice, haha! Its probably, ‘don’t take criticism to heart.’ You can’t please all of the people all of the time.

Alex Beecroft http://alexbeecroft.com/ Author of Gay Historical and Fantasy Fiction. Her writing is incredible, very atmospheric. I read something she wrote when she was 18 years old and its brilliant. She’s just got better since!

Author bio (In her own words)

I faffed around at writing for many years until I had my daughter, but becoming a mum seemed to kick start something in me: I realised that I now had a purpose and time was limited, so I must get on with it.

I live with my family in a small village in southern England and the winter of 2009 was severe, so we were house bound by unusually deep snow. So I settled down in my office (i.e. the corner of our bedroom) and began my first book, which was published in 2010.

I haven’t stopped writing since. I go through phases of planning my story, writing furiously, or editing it. It is much easier now my daughter is at school and I get a few hours of work done each day.

My daughter has truly been an inspiration to me: she has had severe health problems but is always smiling and laughing, planning for the future, full of ideas. Working at home writing and editing has been ideal, I love my life.